The WKU Chapter of Sigma Pi Sigma now has a Guest Book page.  Please feel free to drop in and leave a comment if you are a alumnus of our chapter. 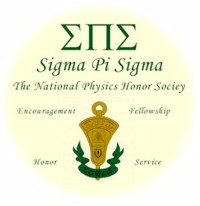 The requirements for membership in the WKU Chapter of Sigma Pi Sigma are:

Each spring WKU physics majors who have met the above requirements will receive an invitation to join Sigma Pi Sigma and to be inducted into the honor society at the annual banquet.

Sigma Pi Sigma is the official honor society of the physics profession. Through election to Sigma Pi Sigma, distinctive achievement and high scholarship in physics is recognized and celebrated.

By honoring high achievement in physics and upholding high standards for election into Sigma Pi Sigma, the Society provides an incentive for all physics students to rise to excellence. The Society also encourages physics interest and science literacy in the general public.

With the recognition of accomplishment comes a responsibility to service. As persons who earned our Sigma Pi Sigma insignia pins by midnight oil, we appreciate the struggles of fellow students and colleagues who are facing similar challenges. When our experience and resources are placed at their service, then Sigma Pi Sigma touches more lives than may be counted by the number of its members. Because we respect the struggle for excellence, we support the generations of students that follow us.

Sigma Pi Sigma members cut across generational lines. The first members were inducted in 1921. New members are added every year. This represents many generations of experience and wisdom that can be brought to bear on matters of common interest to all members.

Sigma Pi Sigma members cut across professional lines. Besides physicists, many members of other professions also enrich our ranks, uniting a diverse group of people who have shared in the culture and traditions of physics, and have demonstrated that they could excel in it.

With this common thread of a shared background in physics running through so rich a diversity of generations and professions, and with the publications and meetings of the Society available for communication instruments, Sigma Pi Sigma nurtures a spirit of professional community among its members, and encourages them to offer their collective wisdom and perspectives in the service of society.

Sigma Pi Sigma fees pay a portion of the cost of operations of the society. The remainder comes from SPS dues, alumni contributions, and AIP funds.

Join the WKU Chapter of SPS by downloading, printing and completing the PDF membership application form found in the link to the right. Give this form with your $20 national dues to one of the WKU SPS Officers.